(Nov. 19, 2019) – The positive impact of a mental health and sports program delivered by local branches of the Canadian Mental Health Association (CMHA) in partnership with the Northern Ontario Junior Hockey League (NOJHL) has caught the attention of other Jr. A leagues in Canada.

After a successful four-year run in the NOJHL, three other leagues within the Canadian Junior Hockey League (CJHL) have committed to participate this season in Talk Today, a multi-faceted CMHA program that promotes positive mental health while supporting individuals who may find themselves in crisis.

The CJHL and CMHAs will aim to support the remaining leagues in the Canadian Junior Hockey League with Talk Today over the next two years.

Talk Today in the NOJHL began in 2015 and since then nearly 700 players, team staff, billets and family members have received mental health and suicide prevention training.

Once again this season, CMHAs in Sault Ste. Marie, Sudbury/Manitoulin, Cochrane-Timaskaming and Muskoka-Parry Sound will support another 280 players across the NOJHL’s 12 teams.

“As early adopters of the program, we’ve experienced firsthand how Talk Today can help reduce stigma and normalize conversations about mental health around the rink and in the community,” said NOJHL Commissioner Rob Mazzuca. “Mental health should no longer be a taboo subject in sports and the expansion of Talk Today across the CJHL will help raise awareness and provide resources to players who need it.”

“Since 2015, the NOJHL has demonstrated incredible leadership by bringing mental health and suicide prevention training directly to its players, team staff and families,” said CMHA Sault Ste. Marie Executive Director Annette Katajamaki. “It has been a pleasure to support the league to ensure mental health can be talked about openly in the hockey community.”

“Talk Today has created mental health conversations and reduced stigma in dressing rooms, hockey rinks and communities across Canada,” said CMHA Cochrane-Timiskaming Executive Director Paul Jalbert. “Thanks to the NOJHL and the NHL Foundation, we’re pleased to bring Talk Today to hundreds more players, team staff, families and fans, which we believe will create positive change and save lives.”

“We’ve seen the impact of Talk Today and how it can help reduce stigma and normalize conversations about mental health around the rink and in the community,” said CMHA Sudbury/Manitoulin CEO Patty MacDonald. “Mental health should no longer be a taboo subject in sports and the expansion of Talk Today across the MHL will help raise awareness and provide resources to players who need it.”

“Working with the NOJHL allows us to share with these players and teams the benefits of maintaining positive mental health,” said CMHA Muskoka-Parry Sound Executive Director Diane Brown-Demarco. “And together with all our partners, Talk Today can help create environments where people aren’t afraid to speak up and ask for help should they be struggling.”

“The NHL Foundation recognizes the positive impact and long-term value Talk Today has provided the hockey community through other development leagues and we’re pleased to have a role in bringing this important initiative to teams in the CJHL,” said John Sanful, Manager of the NHL Foundation. “We strive to create positive change by investing in initiatives that build healthy and vibrant communities through hockey, and we’re pleased to support a program that provides valuable life skills for players which they can use beyond their playing careers.” 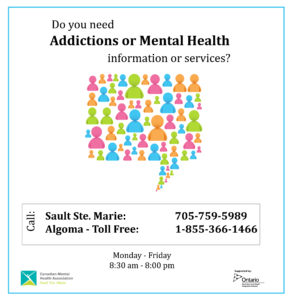 Where can I go for help?